In February 2019 Rachel Schraer, writing for the BBC’s ‘Reality Checker’, wrote that the increase in young people (under 16) with mental health conditions had risen from 11.4% to 13.6% between 1999 and 2017. This, it was asserted, was much smaller than expected. This analysis stood in stark contrast to the Children’s Commissioner’s report on the state of children’s mental health services (2019/20). This report cited that they was an increase of 60% of referrals to CAMHS since 2017/18. This suggests whilst more and more young people were being referred to CAMHS, the majority were not then diagnosed with a mental health condition. This should be treated with care.

Mental health diagnosis is a contentious field and getting a formal diagnosis requires hitting certain parameters in certain time frames. However, in 2019/20 it is evident there was a disconnect.

And then we were hit by the COVID-19 pandemic.

On the 5th February 2022 the BBC ran a significant news story entitled ‘Children’s mental health: Huge rise in severe cases, BBC analysis reveals’. The report highlighted the staggering statistic that there had been a 77% rise in the number of students needing specialist treatment for a severe mental health issues. The article noted that 409,347 young people (under 18) had been referred to the NHS in England for specialist care due to suicidal ideation or self-harm.

The big question is why?

We may well be answering this for generations as we unpack and unravel the impact of COVID-19 on societal structures and neuro-development. However, often talked about, in the media and in staff rooms up and down the country, is the impact of social media. Is this what has spurred on the rise in mental health concerns amongst young people since 1999?

At first glance it seems logical. The social media explosion, beginning with Facebook (although many will argue Bebo and MySpace) and then spanning into Twitter, SnapChat, TikTok, Instagram and beyond correlates in timing. Matt Hancock, back in 2019, gave a speech which both linked mental health problems and social media whilst acknowledging it was too early to make a definitive link. Research from the Education Policy Institute and The Prince’s Trust in January 2021 argued that social media has a negative impact on mental wellbeing and in particular self-esteem, which often led to feelings of depression and hopelessness. The Wall Street Journal in September 2021 went as far as saying that Facebook knew that Instagram is ‘toxic for teenage girls’.

Is it too simple to make this link however? Stuart Ritchie found that the Wall Street Journal’s analysis above has shown correlations not causal relationships. He argued that whilst it could be that Instagram made young people’s mental health worse, it could also be that young people with poor mental health are more likely to use social media. This may be because they feel more isolated, are searching for validation or social interaction.

This is a debate which will rage for years. However, there are some points worth noting –

The negative impact of social media on students' mental health : What do we do as a profession to tackle this?

It is an almost impossible question to answer. What we do know is that ignoring it doesn’t work in a similar way that banning it doesn’t either. Teachers need educating on social media as trends frequently change. Whereas Facebook may be what most teachers know and are comfortable with, few use SnapChat or access TikTok. Hence, we have to focus on educating, informing and supporting.  Social media is here to stay, and we have to adapt. 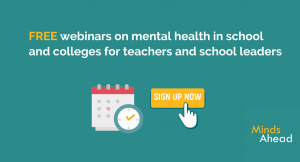 Masters degrees to strengthen mental health in your school

PrevPreviousWhy having a school mental health specialist as part of the staff team is vital to support young people’s mental health?
NextMinds Ahead will present at the Child Mental Health and Wellbeing in Schools Digital ConferenceNext